I have never been so happy. 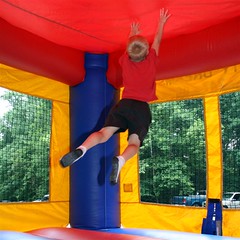 I have a dream. I want to get one of those big moonbounce things kids jump around in, some black lights, a ridiculously loud sound system, and the most tooth-enamel destroyingly happy dance music known to man. What happens next may not be terribly dignified, but good luck finding a more entertaining exercise.

Plus you know I play DDR, if I was seriously worried about not looking like a total spaz I'd probably find another hobby amirite?

My priorities are so different from what I thought they'd be.

Many things I thought I needed, I don't even want any more.

Things I thought I didn't ever want, and even wanting them be trivial, turn out to be the most important in the world to me now.

If only I had known it sooner.

I spent most of the day writing an email.

I put down a lot of words, but most of them didn't say anything. I didn't realize this until I tried to form a conclusion, and realized that there was none.

I think I was just writing to myself anyway. I'm content for now.

I know this won't last forever.

Today though, I can bury my apprehension of the crash in the euphoria of the high.

And who knows? I've been wrong before.

And I can't go on knowing they're broken.

...and inside my head a voice keeps screaming "this isn't fair", as if appealing to some higher authority that doesn't exist, demanding the world be made flat and simple, cold hard facts be rolled back to save me from the harsh unforgiving blandness of day-to-day life in this insipid rat-race...

Played WoW last night for the first time in about three months... so much interesting stuff was going on In Real Life I nearly forgot about that game. To be fair, life is still pretty busy, just less interesting. Tough choice coming up, and though I'm pretty sure I know what I'm gonna do, I still feel paralyzed by indecision.

Well, I won't let WoW take up too much time. I'll play once or twice a week, tops. Maybe PvP a little bit, see what kind of gear I can get. Meh.

Probably the only thing I miss more than her is having a reason to wake up in the morning. I need new motivation. And I will find it. Promise.

But hey, cheer up emo kid, watch this video (thanks